No one could accuse sex columnist Dan Savage of being uptight on sexual matters, and we disagree with him on much, but his take on prostitution is more realistic than, say, that of Valley Advocate editor Tom Vannah. In his June 25 column, Savage responds to a man who says he’s turned on by the thought of his girlfriend being a prostituted woman:

…you could make a more convincing case, PIMP, if you were better acquainted with the realities of sex work.

You should start sucking off strange men for money.

You’ll have to service men, I’m afraid—while lots of men fantasize about being paid to have sex with women, there’s a fatal supply-and-demand problem. Simply put: There are just too many men out there willing to give it away for free. That created a glut on the supply side, which has distorted the market, as there’s more than enough free straight cock out there to meet the needs of straight women.

So you’ll be giving head to dudes, PIMP. And after you’ve choked down a few hundred loads, you can go back to the girlfriend and say, “Sex work isn’t so bad!” with some credibility. And if you keep doing sex work after you’ve sucked off scores of men you’re not attracted to—men who may or may not have treated you with respect, men who may have very different standards of personal hygiene than you do—that might convince your girlfriend to continue to pursue sex work for your amusement.

Our Poster to the Valley Advocate: “Stand up for women! Drop your Massage/Escort ads” 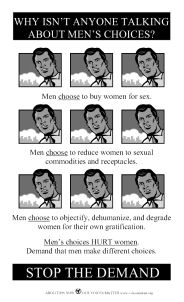 Escort Prostitution: A Response to Tom Vannah, Editor of the Valley Advocate
On March 4, Tom Vannah, editor of the Valley Advocate, took a few minutes to voice his displeasure with NoPornNorthampton on his WHMP radio show (listen to the mp3). We have been bringing Mr. Vannah large amounts of information about the sex industry since 2006. We have asked the Advocate to drop ads for escort services and other commercial sex enterprises. Unfortunately, Mr. Vannah believes this is a matter of freedom of speech. Any compassion he might feel for people in the sex industry or the community at large is not as important.

Mr. Vannah concedes that “there is some percentage of people who are not willing participants in the sex industry”, but believes that if the Advocate refuses to accept Massage/Escort ads, this will unacceptably crimp “artistic freedom”. He mentions Mapplethorpe pictures as an example. How dropping ads for commercial sex enterprises will compel the Advocate to turn away Mapplethorpe pictures is not clear to us…

If we have failed to exercise “due diligence” or the “proper steps”, as Mr. Vannah claims, we would be happy to know just what those steps are. We invited Mr. Vannah to dialogue with us privately last year. We received no response. There are over 45 articles in our Prostitution category. How much evidence does Mr. Vannah require before conceding the obvious, that the Advocate almost certainly abets and profits from prostitution, and that prostitution is a miserable and dangerous job for most women?

MSNBC Investigates Human Trafficking and Prostitution in the US; Valley Advocate Advertises “Foreign Fantasies” Where “Everything Goes”

Sweden’s Prostitution Solution: Why Hasn’t Anyone Tried This Before?

Abolishing Prostitution: The Swedish Solution – An Interview with Gunilla Ekberg by the Rain and Thunder Collective