Counter-protester holds up a sign near Amazing.net at 135 King Street, Northampton in 2006 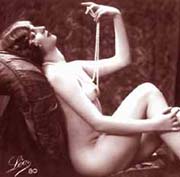 Gail Dines Presents: Pornography and Pop Culture (explicit)
“Now, I’ve been on television shows with many pornographers, and they have the absolute chutzpah to turn around and say to me, ‘But we love women. This is a celebration of women.’ Well I have to tell you, if you think calling a woman a ‘cumbucket’ is your sign of love, sorry… These men hate women…

“I say this to men over and over again. You might not go to pornography hating women, but you’re sure as hell going to come away with that feeling. You get much more than you bargained for with pornography, and that’s the problem with it. The other problem with pornography is it sexualizes the violence and degradation against women. And when you sexualize violence you render that violence invisible, because when men see that they can’t step back and critique it… You are basically trying to have a rational conversation with an erection and it doesn’t work.”

Ana Bridges: “…I’m going to begin to talk about what it is that we found after looking at these 304 scenes in these 50 top selling pornographic films. In total in the 304 scenes we coded a total of 3,376 acts of aggression. That ends up averaging…to an aggressive act every minute and a half. The scenes on average contained eleven and a half acts of verbal or physical aggression…”

Bridges: “So how many scenes didn’t contain aggression? About 10%…”

Bridges: “Less than 10% of the videos showed any kind of a positive act, and that included kissing… caressing happened maybe twice. Something like a verbal compliment, ‘Gosh, you look pretty’, not, ‘Slut bitch, come over here,’ that happened maybe five times in the 304 scenes. So we have a ratio of positive to negative behaviors of 1 to 9, which is not a sustainable, happy relationship.”

Ask any girl and shes sure to tell you – “There’s nothing more romantic than Ass-To-Mouth”.

Herbert, Brooks and Osayande on Misogyny, Money and Power; Amazing.net’s War on Women and Blacks (explicit)
Pain In The Ass
The bitch has been naggin at you all fuckin day. Take out the garnage. Do the dirty fuckin dishes. Dont drink so much beer. Blah Blah Blah. Theres only so much a man can fuckin take so when its bed time make it your turn to be the major pain in her ass…

Now Showing at Amazing.net: The War on Privacy and Consent (explicit)
Blame It On Daddy
Look what daddy made them do. These chicks are fucked up and they just can’t get enough. Adopt these sluts today make them call you daddy and see what they won’t do!…

Extreme Audition #6
What happens when you have a tiny little blonde walk into your studio? Well a lot of fun for Michael Kahn. This pretty little thing was in tears by the end of this video. She had no tolerance for pain and so it was great fun to beat her little ass…

Real Hidden Coed Girls #1
The college coed cummundrum continues! In other words college chicks are getting filmed naked! Without their permission! Naked while they change dress shower get ready for bed or take communal showers with other girls at the…

Now Showing at Amazing.net: The War on Relationships (explicit)

Rocco’s Animal Trainer series, I’m told, traditionally ends with Rocco fucking a woman up the ass while he shoves her head into a toilet and flushes…

Comment on “How About You Don’t Ask To Come On My Face On The First Date?” at Jezebel
Jezebel is a busy website devoted to “Celebrity, Sex, Fashion. Without airbrushing”. It’s a Gawker property and hardly a bastion of anti-porn sentiment. Here is a comment submitted by apollonia666…

Um. Once had a really hot Italian guy put his finger in my hiney during our first (and only, for a reason that will be clear in just a moment) time in the sack, which was okay, but then he tried to put the same finger in my MOUTH.

Dead. Fucking. Halt. I showed him the door.